My book, One Must Imagine Scott Free Happy, has finally been released. It can be purchased on Smashwords and Amazon. Here is the official summary of the book: 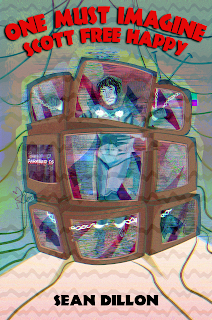 FROM THE PAGES OF PANELXPANEL COMES...ONE MUST IMAGINE SCOTT FREE HAPPY!In 2017, DC Comics began publishing Mister Miracle, a 12 issue comic book series written by Tom King and drawn by Mitch Gerads. It tells the story of a man who survived a suicide attempt and what followed from that dreadful night. It's a story about war, abuse, comics, and love. It's one of the most interesting texts of 21st century comics literature.One Must Imagine Scott Free Happy is an exploration of these themes and so many others. What happens when a book haunts the subconscious of the mind? How does one survive the 21st century when one doesn't know if things make a lick of sense? Are dreams another means of ghosts haunting you? Is there life after birth? Is there life on the Earth?There are twelve main essays, focusing on themes and ideas within Mister Miracle, fourteen side essays, focusing on texts related to Mister Miracle, and two appendices (one featuring the original reviews written for PanelXPanel, the other exploring other texts written by Tom King).
Posted by Sean Dillon at 12:14 PM